I became pregnant last year, after much consideration about becoming a mother. It was surprisingly easy considering everything they say about getting pregnant after 35 years old. At the same time, my job was in one of those years where it takes me everywhere, which is one of the reasons I enjoy it to begin with 🙂 Carrying a growing belly and teaching about IoT and Galileo and Edison was great fun, but also great learning. So, in case you find yourself in the same situation, here’s some tips:

It is not for everyone

First of all, it is not for everyone. Many people like to say “it’s not a disability” – that’s only partially true. From my perspective, it wasn’t an easy ride. From the perspective of some people I know, my ride was a piece of cake. I know of two women that lost several kilos, that ended up a week in a hospital, or having to spend months in bed, otherwise they would miscarry. So comparing to this, my smells aversion and tiredness seem very easy. So please do not take my experience as a measure for what any pregnant woman can do – it doesn’t work like this.

Eat your 5 a day! And always have a water bottle nearby

When you are in the first trimester, especially if it’s your first time, most likely you will get those well known symptoms: nausea, food and smells aversion. My symptoms kicked in when I was only a few weeks, during 2nd month. I was traveling to England for a residential school, and after the long walks through the campus proved to be too much for me, I was allocated in a dorm that was very close to the classes and activities. However, that building probably has not seen its carpet deep cleaned for a decade. And my nose picked it up. And being England, they had that effing carpet even in the elevator. And there was nothing I could do about it. But the food also triggered my stomach problems, endless heartburn and disgust by the unappealing boiled vegetables. No wonder people have problems eating their 5 a day!

So the first rule is: good, healthy food is essential. People who travel a lot know how much better it gets when you eat well, balanced meals, and drink plenty of water. If you are pregnant, it makes the total difference between being a functional human being or some sluggish resemblance of yourself. Make smart choices, don’t be afraid of being picky and demanding. Only you will know the price you will pay for not giving your body all the rest and nutrients it needs. And it is really for you to function, because guess what? Your baby will be just great. He or she will deplete you of all your vitamins and reserves, because that’s what pregnancy does. Of course you want a healthy baby and should do everything you can to ensure it, but pregnancy makes sure everything goes to the embryo first, and you have the leftovers. So really, pack your fruits and veggies, chose some good carbs – you need them to think! – and keep a water bottle always in hand.

Tell everyone you are pregnant

I was lucky in my first big travel commitment, to conduct a hackathon in Paris. The agency organizing it for Intel was extremely sensitive to my needs, and I got fruits, iced tea, water, people carrying my bag. But they knew I was pregnant. In another event, in Berlin, most people assumed I was just obese. I even got someone pitching me a project about a chair that would give electrical shocks to people who didn’t move around too much and that would be a good incentive for me, after I mentioned that it was getting harder to get of the sofa. Soon afterwards, someone else asked me if I could help moving a table. So, next day I was wearing my “Baby loading t-shirt” just to make things clear. Also, remember that dorm close to the classes during my study week in England? It was granted after I had a very scary moment when I began to bleed a bit during second day at school. I could have been nothing, it could have been the long distance between the original dorm and the classes having an effect, but have I told them upfront, maybe I had avoided the deeply scary moments I spent unsure if it was something serious. So, if you are like me, you may think it’s not worth the trouble to mention, you don’t want people to think you want special treatment. But, the other option may be really detrimental to you, so, balancing things out, you are best out telling people upfront you are pregnant, just so they are aware. Most people I met were wonderful and understanding and helping me to be more comfortable than I could think I could be.

Bloating has always been a big problem for me while traveling. I normally bloat up to 2kg just by flying, and it was even worse during pregnancy. I use to measure how bad it was by checking if I could see my ankle bone or not. After a flight, even a short one, it was sure that I wouldn’t have ankles, foot and legs would be all a continuity. But I learned a secret a long time ago by a masseuse: soak your foot, preferable all legs, into a hot bath, immediately followed by a cold stream of water. It is so challenging, but after a few hours, I could see my ankle again. But soon that wasn’t enough, so compression tights it was. Oh my god, trying to pull compression tights up your legs maneuvering around a rotund belly was the most ridicule situation I remember myself on.  So many huffs and puffs that I wanted to give up every time, but the thought of normal legs by the end of the day kept me going.

Another thing it was surprising for me was how long would take me to recover from each travel. Like, if you only travel 1h, it would barely count, right? Wrong! Every time it would take days of oversleeping and slowing down to recover. Granted, most of the travels also involved long working hours, which was interesting. During the hackathons, I wouldn’t feel much tired, as I believe the adrenaline would kick in and keep me going. But after I was done, oh my gosh I was so done. And even travel just for vacations would get me exhausted. So I started planning everything to allow a couple of day of rest after any travel. 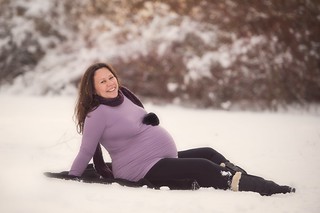 I kept doing Pilates, mostly because my awesome instructor and great friend Sabine kept telling me it would get better sooner if I didn’t stop. And I felt towards stopping because very very early on the pregnancy, I went from being advanced to a total beginner in class. I could barely do the moves, feeling clumsy and without the control of my core muscles – just like that, from one week to another. The reason is that the hormones flooding your pregnant body make your muscles soft, so working out would barely maintain them, but they would not get stronger. Sabine promised me that once I am done with nursing, all the muscles would resume to the state I left them. Let’s see. But even without being able to perform as well as before, just the general feeling of stretching, reaching out, even if you can reach less and less, makes you feel great after the exercise. You will be more tired, so prepare to go to bed even earlier, but your back will appreciate. Here in Germany Yoga for Pregnants is really popular for the same reasons. I also did a few pathetic swimming sessions, but after 6 months, it is just wonderful to be floating in water where your belly is so much lighter. Midwives will also say that the more you move, the easier will be your delivery. I wasn’t that active, don’t take me as an example, I did mostly only once a week, while they recommend you to at least walk 15 min a day. But I hope the up and down the stairs at home and work will count for something. That is, until a limit. I reached my at 36 weeks, while most women will reach that at 32, according to Sabine (although she did until 38, cheeky fit lady :)). When you reach that limit, you will know it. If the exercise makes you feel uncomfortable in your belly, you are done, from now on is more sofa than yoga mat.

Live in a developed country and work for a great company

And here is where I feel really bad for women living in countries not as understanding as Germany, or working for companies less sympathetic than Intel. My working from home hours increased proportionally as the pain in my back after spending time in the office. And due German laws, 6 weeks before my due date, I was on leave. I remember the two last days in the office, which were very difficult due lack of elevator and many things to check, to leave everything taken care of. The pain later at night when I tried to find a position to sleep almost got me into the hospital, as I was suspicious I was in labor. But it was just my huge belly tired of being sustained all day long. And this was 6 weeks prior. What about women who have to work until delivery date? They are just super heroes…

Do one thing at the time, and slow down

I always have been the kind of person who tries to do everything at the same time right now. I am still relearning how to do one thing at the time and slowly. It is for the best. I have heard before about the constant sleepiness and just general feeling tired, but I didn’t know my IQ would seem to drop. It takes more time for me to absorb information, to make decisions, to plan and execute. I would beat myself up to be back on track if I wasn’t so tired. So, slow down it was. I wonder if I will continue to be like that after sometime. No idea. Any guesses?

One thought on “Things I learn from travelling while pregnant”